skip to main | skip to sidebar

Great news guys! The Twilight Saga: Breaking Dawn will be cut into 2 films! That means another movie to look forward to! SPOILER ALERT! SPOILER ALTERT! The first movie will focus on Edward and Bella getting married, Bella's pregnancy, and the birth of Renesmee.

The second movie will focus on Bella's transformation into a vampire! Rob Pattinson, Kristen Stewart, and Taylor Lautner will be returning in Breaking Dawn as Edward, Bella, and Jacob. The rest of the main cast (Cullens and Werewolves) have been comfirmed to return as well, so no worries! The Twilight Saga: Breaking Dawn part 1 will begin filming in Nov. 2010, and part 2 will be filmed right afterwards. The first film is scheduled to be released in November 2011, and the second in summer of 2012. In the mean while, we wtill have Eclipse to get pumped up for!
Posted by eRiN at Monday, June 21, 2010 No comments:

While filming scenes in Italy, Bella is seen sporting a green button-down shirt and her usual J brand jeans. Her look is complete with blue Keds to go along with her comfy-casual style. 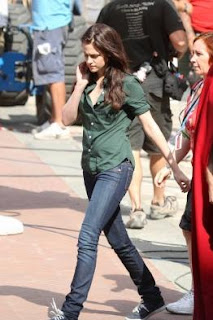 Get a similar green top from American Eagle.

Rob Friedman and Patrick Wachsberger will have to spend a HUGE amount of money if they decide to split Breaking Dawn, the fourth book in Stephenie Meyer's Twilight series, into two separate movies. But for now, nothing has been decided for sure. Many sources say that everyone at Summit is favoring the two-movie option. The main actors, including Robert Pattinson and Kristen Stewart, have signed contracts for four movies. Their contracts would have to be renegotiated if Summit decided to turn the saga into five movies. I'm with Summit on this one. One 4 hour movie just wouldn't work. It'd be WAY to long, and even yet huge parts of the book would have to be cut out. Comment on what you think!
Posted by eRiN at Sunday, December 06, 2009 No comments:

The Official Twilight Convention Tour will be stopping at 25 cities in 2010 all across North America. You can purchase tickets at www.twilightconvention.com. This is the list of confirmed dates at press time:

Taylor Lautner has been confirmed by Paramount that he will be playing the lead role in movie Max Steel. The movie is about a 19-year-old extreme sports junkie. He is recruited by a secret agency after an accident affects his body, leaving him with superhuman powers.
Posted by eRiN at Sunday, December 06, 2009 No comments:

So who's seen New Moon? What'd you think of it? Disappointed? Impressed? I have to say I was not impressed with new director Chris Weitz job on the movie. Although I loved it, I was disappointed with the cheesy-ness, and the horrible Volterra fight scence. The fight scene was in my opinon, very "yeah right..." with the slow motion & blur effects. I also wished they had amped up Rob's abs! Comment on what you think!
Posted by eRiN at Saturday, November 28, 2009 No comments:

Should the book of Jacob be incorporated into the Breaking Dawn movie?